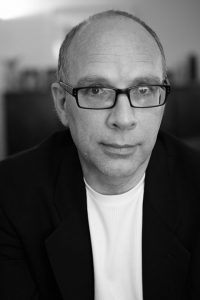 Jay Rosen has been on the journalism faculty at New York University since 1986; from 1999 to 2005 he served as chair of the Department. He lives in New York City.

Rosen is the author of PressThink, a blog about journalism and its ordeals (www.pressthink.org), which he introduced in September 2003.

In 1999, Yale University Press published his book, What Are Journalists For?, which is about the rise of the civic journalism movement. Rosen wrote and spoke frequently about civic journalism (also called public journalism) over a ten-year period, 1989-99. From 1993 to 1997 he was the director of the Project on Public Life and the Press, funded by the Knight Foundation.

Since 2017 he has been the director of the Membership Puzzle Project, which studies membership models for the support of public service journalism.

In 2008 he was the co-publisher, with Arianna Huffington, of OffTheBus.net, which allowed anyone who was interested to sign up and contribute to campaign coverage for the Huffington Post.

As a press critic and reviewer, he has published in The Nation, Columbia Journalism Review, the Chronicle of Higher Education, The New York Times, the Washington Post, the Los Angeles Times, The Guardian, the New York Review of Books Daily and many others. In 1990 he and Neil Postman (friend, colleague, mentor) hosted a radio show on WBAI in New York called “The Zeitgeist Hour.”

In 1994 he was a fellow at the Shorenstein Center on the Press, Politics and Public Policy at Harvard University, and in 1990-91 he held a fellowship at the Gannett Center for Media Studies at Columbia University.

A native of Buffalo, NY, Rosen had a very brief career in journalism at the Buffalo Courier-Express before beginning graduate study. He has a Ph.D. from NYU in media studies (1986).