Designs for a Networked Beat

"When the users know more than the journalists, what are good journalists supposed to do?" These are lecture notes and links from my presentation to the editors of Quartz, May 13, 2013.

The ideas that I share with you tonight originate in a personal obsession of mine that is now 14 years old. It dates back to 1999 when I read this article by Andrew Leonard in Salon: “Open Source Journalism.”

Leonard’s piece is not a manifesto. It tells the story of a specialty site, Jane’s Intelligence Weekly, which lacked confidence that its draft article about cyber-terrorism was good enough. So Jane’s decided to consult the readers of Slashdot, who knew a lot about the subject. And they made the article better. (Here’s the original Slashdot thread.)

This, I felt, had implications for beat reporting.

Also in 1999, Dan Gillmor of the San Jose Mercury News, the first newspaper journalist to have a blog, strung these simple words together. “My readers know more than I do.” It was one of the discoveries he made covering Silicon Valley during the first internet boom. 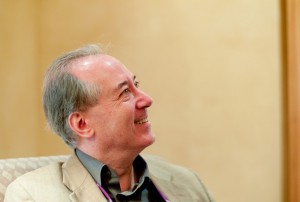 Of course this would have been true in 1959. Gillmor was one of the first to see what was different about 1999. The people who knew more than he did could easily reach him with that knowledge. They were more connected: to the reporter and each other.

This too had implications for beat reporting.

In 1999, that fateful year, Dave Winer published his seminal post, Edit this Page, in which he said: “Writing for the Web is too damn hard.” He and others were then working on blogging tools that would explode over the next year or so: Winer’s Frontier, blogger.com, Live Journal, and later Movable Type.

To me, Edit This Page is the moment just before the web goes from Read Only to Read/Write. (Later, of course, it would become read/write/share.) In 2009, Winer put the consequences as clearly as he could: “The sources go direct.” They can now publish directly to the users.

This had further implications for beat reporting.

* “My readers know more than I do.”
* Open source journalism can work.
* Edit This Page, which became blogging
* “The sources can go direct.” (And they do.)

The spirit of ’99 affected me personally. These are projects I undertook in the same spirit:

So this is my obsession, distilled down:

When the users know more than the journalists, what are good journalists supposed to do?

Many people who are here tonight do this kind of work every day. A good name for it is networked reporting, which is by now an established practice. Consider:

* Live blogging as demonstrated by The Guardian and the New York Times Lede blog is an inherently networked practice.

* CNN’s i-Report is a network of contributors that can be activated when there is breaking news.

* Web forms as used by ProPublica, The Guardian and other sites allow for collecting data from those very users who know more than journalists.

And, of course, it is routine for journalists to find sources through social media.

We’ve made a lot of progress since 1999! But not nearly enough. So this year I shared my obsession with my graduate students in NYU’s Studio 20 program. We began with a simple definition of networked reporting:

When the many contribute (easily) to reporting that is completed by a few… that’s networked reporting.

Our aim was to make incremental progress on that problem by doing small projects with six partners using 2-3 person teams. Here’s the list of projects. My partner was Quartz, Atlantic Media’s new business publication. I wanted to work with Quartz because their concept of editorial obsessions intrigued me. I proposed that we work together on designing a networked approach to covering what they call an “obsession.” They would give me the specs, I would reply with my designs.

The specs from Quartz are here. (“Put together a suite of tools and techniques for quickly booting up a network around a fast-moving, ongoing global news story that cuts across traditional beat boundaries and is worth obsessing about…”) The tools were researched and tested by Anna Callaghan, a journalism grad student at NYU. We decided to use covering bitcoin as window into digital money as the “fast-moving, ongoing global news story” that we would design a networked approach for.

Warning: These ideas are 100% synthetic. They are not original to me. They have emerged from the practice of networked reporting and the use of social media tools by thousands of journalists since 1999. So if your instinct is to reply, “we did that four years ago!” you’re right. You probably did.

Pro tip before we begin: It’s smart to treat the One Percent Rule as a design principle for a networked beat.

√ makes better products for the 90 percent who will only consume…

√ from efficient interaction with the 10% who will possibly engage, while

√ recruiting the best of the 1% into co-production.

Step 1: Define the right combination of news flows for this particular beat.

Step 2: Put an intelligent filter, made for multiple uses, on the combined flow.

Step 3: From smart filters on combined streams, make a series of simple and useful products.

Step 4: Start to register, verify and make contact with the best independent sources on the beat.

Step 5: When they’re good enough hook the filtering tools up to the work flow for beat coverage.

Step 6: Launch your “inbox on steroids” and prove to the users that it works.

Step 7: Bring key sources (from step 4) and fellow obsessives into co-production. And be prepared to compensate.

Another way to display the same design is to describe the different levels of investment in networked reporting. You could also call them stages of development. I see three:

* Bot for the beat: an automated Quartz Twitter feed for bitcoin news
* People to follow: a list of people who converse and share links about bitcoin.
* Rock solid explainer: original content by Quartz explaining background to bitcoin for its users.
* Preferred sources list: the best of the best, selected and vetted by Quartz
* River of news: An automated feed of bitcoin news via select sources curated by Quartz.(Like this one for tech.)

* Register as a Quartz bitcoin source: (Legal name or pen name allowed. This is one way people can raise their hand as a fellow obsessive, and get vetted.)

* Good alert systems for writers and editors, making assignments easier and coverage better
* Newsroom talent ready to do stories when signals are strong.

* Twitter feed for beat, handmade and a human voice

* Engage key contributors in co-production, similar to the moment when a successful blog becomes a group blog by hiring from the comments.

* Launch a sources poll. A weekly survey of obsessives, carefully designed to consume a finite amount of time per week, which takes the temperature of the beat but also provides clues to what the beat should be covering by asking the people who care the most. (Sort of like this.)

* “Quest journalism,” an example of which is here.

Summing up: My recommendations for Quartz.

Recommendation 1. Invest now in Level One development: unique news flows and intelligent filters– something Quartz should try to become good at. Very good. This is my primary recommendation.

Recommendation 2. “Filtered by Quartz.” We think there are brand opportunities for Quartz in making its own: Intelligent filters, Preferred sources, Rivers of News (another Dave Winer concept.)

Recommendation 3. Influence the development of tool companies that make your filters smarter and your work easier. Little Bird and Storyful are two we especially recommend.

Recommendation 4. Pick your spots for fuller investment in a beat via metrics that flow from the minimum viable product. An obvious example: where the alert systems are spitting out very good story ideas, the beat is ready for more investment.

Recommendation 5. Put all tools and practices to the “enterprise journalism” and “unique signature” tests. Meaning: you’ll know it’s working if the tools and methods recommended here help Quartz transcend commodity coverage and produce journalism with a unique signature. If they don’t help with that, drop this approach.

Recommendation 6. Quartz Pro. There’s a possible business opportunity in monetizing signaling systems that you know from Quartz experience work. That’s why its crucial to bring some of the obssessives in from the cold, so to speak.

Recommendation 7. Campaigns can be good punctuation points. Once they’re over, fold your tent and move on to other beats.

Recommendation 8. Stage Three beats are an insight community, as Techdirt’s Mike Masnick calls it. Some will pay to know what a crowd earned this way thinks.

We certainly have come a long way since 1999. I got to witness some of the early discussion as a tech reporter for Wired. I remember reading Gillmor (and you!) in the early 2000’s. Even moreso – I was lucky enough to work with you on 2.5 of the 4 projects you’ve worked on since starting the blog in 2003. I would often say that my career in journalism has focused on the process of journalism and experiments to make that process more transparent and participatory (whether that be about networked reporting or in monetary end of the journalistic process).

It is interesting to see the general progress of “citizen journalism” (a term I dislike) which has now evolved into a general understanding as ‘networked reporting.’ It seems as if collectively we have all come to a kind of notion that ‘citizen journalism’ is only of real value in a network of some kind (CNN’s iReport loses value with CNN… the “pure play” citizen journalism site (Now Public) has less value with a larger network steering)

Even more interesting (and what you’ve done here) is to find the best practices and principles behind networked reporting to help push the practice forward. We’ve certainly gotten well past the “gawker” stage of networked reporting. I like to think that Assignment Zero helped push the collective industry past that ‘gawker’ stage (and perhaps the same with Spot.Us and crowdfunding).

But we also, as an industry, haven’t gotten it down to a science. Perhaps we never will. Some things are never an EXACT science (weather predictions are still %’s) but even those improve as we get more data and observe more instances.

[…] result, as Rosen outlines on his blog, is a series of steps meant to inform journalists and media companies of how they might take […]

Crowdsourcing is here to stay — now it’s about building tools for networked journalism — paidContent says:
14 May 2013 at 2:16 pm

[…] the battle over whether it has journalistic value seems to have been mostly won. Now it is about developing a shared vocabulary and methods for helping journalists do […]

Love the thinking, Jay. Here’s a PPT slide that I’ve used over the years to help people understand. You’ve gone farther, but this tells it in a pretty clear way. Open the slide and click through the animation. http://www.thepomoblog.com/jrosencuration.pptx

Wow, that’s what I was searching for, what a stuff! present here at this web site, thanks admin of this website.

[…] its expertise in rooting out, assessing and interpreting facts – see Jay Rosen’s penetrating meditation on the networked beat for more on this – or for its ability to moderate the national […]

RV lovers tend to help accessorize their vehicles with perfect gadgets and things.
Here is another website with Incredible Hulk coloring pages:.
How as to what too much exposure to fluoride can perform to your health.