Giving good advice: my keynote presentation to #ISOJ. Plus: a new project that may not work.

My presentation to the International Symposium on Online Journalism (ISOJ) in Austin this weekend was called: "Giving Good Advice: Reflections of an academic on 25 years of advising journalists and media companies." I composed it using an outlining tool, Dave Winer's Fargo. You can find the results here. Click on the arrows to display the notes that are "hiding" underneath.

The final part of my keynote was the first reading of something new I have been working on for a while. 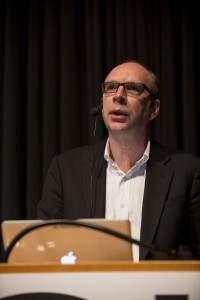 It’s intended to be a performance piece: PressThink in front of a live audience. Whether I will ever have a completed work good enough to present “live” I do not know. My idea is to develop the work in five-minute sections that are the performance equivalent of blog posts. A complete “show” would be 12-15 of those. (A cultural reference and wow point for the project: the great Spaulding Gray monologues of the 1980s and 90s, which I still love…) You can see the PressThink Live idea in rough form in this video, based on a post I wrote in 2005.

There’s more to it, but this is all I want to say for now because my plan may not work at all! Meaning: I may not be a good enough writer of scripts for myself, or a good enough performer to actually pull it off live even once. But the reaction in Austin to this little section was good. Good enough to convince me to keep going.

Why Aren’t They Asking for My Advice?

It’s one of my clearest and more potent memories from childhood. I am sitting on a hard wooden bench outside the office of a family therapist and child psychologist. Dr. Horowitz. Inside the office, my mother, two older brothers and an older sister are trying to figure out why they keep fighting and making each other miserable. It’s hard to believe now, but they used to call households like ours — single mom, raising five kids on a schoolteacher’s salary — “broken homes.” And there was something broken about it: everyone was constantly fighting!

All I wanted was peace, and green grass to play on. But at nine years old I had no power to make peace. My options were two and I exercised both. First: I declined to participate in the warring. This made me invisible. But that’s an advantage! When you’re invisible no one throws an ashtray at you. Second: I took notes. Invisible notes. I saw exactly what he did to needle her, and how she over-reacted, which only encouraged him. I felt the interlocking genius of their misery. I knew what co-dependence was 20 years before I knew the name for it. And I did feel a kind of awe at the power and efficiency of human denial. It’s all in my notes.

So there they were, around 1965: inside the consultation room with Dr. Horowitz. And there I was: working on my pattern recognition skills, alone, on that hard wooden bench. And I remember the feeling: “This is crazy. They’re locked away with their problems. All I do every day is study their problems. Why aren’t they asking for my advice?”

Well, the answer is obvious now. I was invisible to my own family. And from that another writer was born.

I’ve asked a lot of journalists over the years: why did you choose journalism as your life’s work? The answers fall into patterns: I love to write. Something new every day. I wanted to tell stories, expose bad guys and make a difference. I wanted to take that magic carpet ride and see the world.

One thing you never hear when you ask journalists that question: “I got into journalism because I have a passion for being… objective!” Or: I’m into detachment, that’s my thing. So I figured this would be a good field for me.

No one ever says that, but they do say: we don’t take sides, so we can’t use the word “torture” to refer to torture in the news pages. Now calling deeds of torture “enhanced interrogation” in the news pages of the New York Times is not why people decide to become journalists. They learn that after they join. Their pressthink gets in the way of what got them into the press in the first place. Which is the kind of thing I point out at my blog, called PressThink.

In 1965 it was: why aren’t they listening to my advice? Today it’s like this:

You want my advice?
—Not particularly.
Great! Well, here it is…

That’s blogging. It feels a lot better than the bench.

Photo: Knight Center for Journalism in the Americas, Creative Commons.

Here’s the video from the conference. My keynote starts around minute 39 and goes to 1:27.

Your anecdote made me gulp, Jay. At my age (71) it’s not often that I look into the mirror of someone else’s reported experience and see some of my own experience in a way I’ve never seen it before.

I guess that means it worked! Thanks, Larry.

Thank you for sharing your deep and meaningful childhood story, Jay

PS: I am going to share this human interest of lessons learned from the presentation 😉
“In the phone sex industry, you have to be trained for three weeks before they let you start working… in the news industry you get one day to learn everything.”

At the very least, journalism education should start teaching students from an admittedly crude dichotomy of objective reporting versus subjective commentary, giving students the opportunity to write in both styles. Without such a duality, journalism students easily and consistently mistake subjectivity for objectivity, and vice versa. At least this is what I’ve seen so far as a journalism student.

In the context of journalism, objectivity only begins to have meaning when what are understood to be facts are put in the context of a projected or forecast hypothetical future. Analysis is required to make the projections and/or forecasts and to evaluate the impact that any supposed facts will have. Without this groundwork – this analysis – then objectivity in the reporting of facts is of no use, and of no meaning, at all. Any argument that journalists are merely lab assistants whose only job is to read the instruments – not even to know how the instruments work or what they measure – is either a cop-out or a willful attempt to suppress access to information.

I think it a shame, if true, that no one goes into journalism because they have a passion for being objective.

“I felt the interlocking genius of their misery.”

Wow, Jay; I have been a passionate, poised lurker here & a fan for a long time, but this rare foray into personal experience was a doosy, hitting home & right on point, on multiple levels. I break my silence to salute you.

Thanks very much Dawn. You picked out a line that meant a lot to me. And thanks for being such a loyal lurker.

I could really visualize Young Jay Rosen sitting there on the bench making notes, fully understanding what’s going on in the family, yet being completely invisible to the ones who you could help.

Your story reminds me of a poem.

After I learned
the secret handshake
of the Partners in Misery,
I saw it everywhere.

I was reminded of an old line:
“…how happy it is to be miserable, or how miserable it is to be happy…”
Not sure the family wasn’t exactly where they wanted to be. Without that, there’s the rest of the world and the rest of the world is scary.
You wern’t invisible. You were a threat to the order of things. Can you imagine how much each of them would have to anticipate giving up in order to change?
I suppose there’s a metaphor applying to journalism here. Someplace.

Ref torture and enhanced interrogation. They may be different. In Iraq, it means you and your wife watch your children raped to death, then you watch your wife repeatedly dipped into boiling water, then you are killed by having a four-foot spike hammered up your butt.
Enhanced interrogation might be…being smeared with red ink, yelled at, wrapped in an Israeli flag.
Two separate terms for two separate phenomena.
Thing is, as I keep saying about other items, everybody khows this. Journos can’t change that.