You use the product. We have the power. You can exit any time. Before then we can screw with you.

Alex Goldman: Have you thought about bringing in, say, like an ethicist to, to vet your experiments?

Christian Rudder, co-founder of OkCupid: To wring his hands all day for a hundred thousand dollars a year?

Fabulous exchange, right? As soon as NPR’s On The Media pointed it out, I wanted to know more about Christian Rudder’s elegant derision. I had read his post at the OkCupid blog, We Experiment On Human Beings!

We noticed recently that people didn’t like it when Facebook “experimented” with their news feed. Even the FTC is getting involved. But guess what, everybody: if you use the Internet, you’re the subject of hundreds of experiments at any given time, on every site. That’s how websites work.

Facebook by accident had this conversation. OkCupid would now have it on purpose. Then I listened to the interview. Three times. It’s that good.

* Christian Rudder will soon be promoting a book, Dataclysm: Who We Are (When We Think No One’s Looking.
* He doesn’t shrink from public controversy.
* Tim Carmody analyzed why OkCupid’s admission didn’t bother people as much as Facebook’s, and why it should have.
* I come to this with views, having written for the Washington Post and spoken up at the Atlantic about the Facebook study that caused such a storm.

You can read the guide first and it affects the way you listen, or listen first, then read.

1. Why I love this interview: the entire thing is about the legitimacy of OkCupid experimenting on its users. They are never not talking about that. Perfect for a podcast.

2. Christian Rudder admits right off that he was “sensationalizing” in his we experiment on you! post. (Most writers don’t admit to that.) I’m trying to provoke, he says during the interview. We have to allow for this. 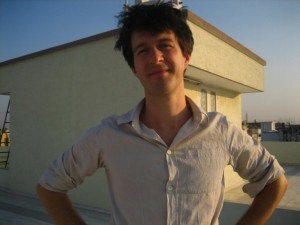 But even someone straining to be provocative reveals themselves in their choice of heat-seeking styles. A man who volunteers that he was “sensationalizing” when he said to users, yeah we experiment on you, so what? is leaning into the scandal narrative, pushing confrontation with it, because he strongly suspects there is nothing there.

3. Rudder’s best point is that sites like his need to experiment on human beings to improve the product. How else would you do it? he asks, interviewing the interviewers. His attempt is to get you, the listener, to shift position. Don’t identify with the hapless user, unwittingly experimented upon. Climb into the chair of the site’s operators. We have this nifty algorithm and we hope it works. But we have to run tests to prove it. Some ethicist says that might be a problem. Is this going to stop you?

4. Alex Goldman and the TLDR crew are at their strongest on informed consent. They make that case come alive. But instead of pretending that he’s obtained consent (by having users check a “terms of service” box) Rudder jeers at the whole idea. Informed consent is a joke, he says. When you participated in those psychology experiments in college you had no idea what they were measuring. It was un-informed consent. That’s how websites work. They are semi-legitimate enterprises. The smarter users — or the users we want — already know this. They accept a certain amount of “getting screwed with” as the price of having an OkCupid that works. It’s the ethicists who don’t get it. The world has moved on. They wring their hands.

5. The interviewers are persistent. They try to solve the problem of consent. Why not level with people? Tell them you’re about to experiment on them. Ask them if they want to be included. Rudder shuts this down. Once they know they’re being studied, they will act differently. Let’s be clear: He doesn’t want to solve the problem of consent. He wants to recognize a power differential between the site and its users.

6. Rudder doesn’t put it this way, but he’s really sneering at the whole concept of user trust. Users don’t trust us to never put our interests before theirs. They know we sometimes do that. They know we don’t tell them about it. Mainly, they just want the site to work. We do too. End of story! Trust, “ethics,” legitimacy, consent: aren’t these terms a little full of themselves?

7. PJ Vogt had the best line: “I’m not comfortable being a guinea pig to the extent that you guys are comfortable making me a guinea pig.” But if he broke up with his girlfriend he would probably be back at the site, he said. That’s Rudder’s point. We don’t need you to be comfortable with our methods. We don’t need them to be seen as ethical or fair. Users won’t know if they’re being manipulated. That’s how websites like ours work. You use the product. We have the power. You can exit any time. Before then we can screw with you.

It’s not as bad when someone’s trying to cater to your desire to find the right mate. It’s worse when someone’s trying to figure out how to get you to hand over your money. Worst of all, and inevitable, is the fact that others somewhere, corporations and governments, are going to try to use the psychology that works to manipulate your behavior and beliefs toward their own preferred ends. There ought to be a line of illegality. Where is that line, anyway?

Which ethicists are making $100k per year? Could you name names?

We’e still suppose to have ethics in a secular society! This man is an asshole!

I didn’t realize that ‘ethicist’ was an actual viable career. Do they practice saying “hey, that’s not cool..’ while fixing their tie in the mirror?

It just seems that any person or company made up of persons should have the capacity to judge for themselves what’s morally sound without having to call in an ethicist to tell them they’re being immoral. Here’s a guideline: if you feel the need to ask a professional, it’s probably not permissible..

An ethicist gets a phone call late at night, turns on the lights and starts packing frantically. An engaged couple in California has found out during their wedding rehearsal that they might be cousins -step cousins though- and they are set to marry by sunset the next day!

The more things change the more they stay the same. Evidently, “all’s fair in love, war and chariot racing” remains the only law with teeth down through the centuries.

I was struck by the coincidence of this piece appearing on the same day the whole “$500 fine for a negative Yelp review” story blew up online. Both Rudder and the proprietors of the Union Street Guest House have a point, to a point, with their whole look-at-it-from-our-pov approach. But neither seem to understand the importance to an internet-faced business of not seeming like a dick, nor grasp the severity of the possible consequences of being judged one. It’s more surprising in Rudder than some random bed and breakfast.