With its curation product Twitter becomes an editorial beast. Does this beast have a soul?

At a recent event produced by the NY Daily News Innovation Lab, I had a chance to interview Adam Sharp, head of news, government and elections at Twitter, and Niketa Patel, news partnerships manager.

The part I bring to your attention — and ask you to watch if you have a special interest — is in reply to this question:

Twitter hiring journalists to curate best-of tabs is the birth of a new editorial beast. How do we know this beast has a soul?

Going into this event we knew that Project Lightning — a Twitter improvement scheme that launches this fall — will curate best-of-Twitter streams on big topics and big events. We knew it would hire professional journalists to create that product. We knew it was meant to solve problems of discovery for users who are not experts.

Things we did not know: Twitter’s editorial idea here is… what?

Or does it even need one at this stage? Is it better off without? That is part of what I meant by asking Twitter’s News and Government team: does this new beast — curation Twitter, editorial Twitter — have a soul yet? Would a platform company already have that kind of thing ghosting around within itself? Or does it go outside and obtain it somehow?

Here’s the clip, about eleven minutes including follow-ups. (Excerpted from this video by the Daily News Innovation Lab.) Specialists: watch the whole thing. Generalists and the time-starved: read my commentary on the other side.

from Studio 20 on Vimeo.

A summary of what Twitter said in reply. (Q. “How do we know this beast has a soul?”)

* People at Twitter love news. They’re obsessed. You may not realize how deep this runs.
* We’re hiring professional journalists to curate for us. They come with souls, right? (Right.)
* Anyone can check up on us as selectors in the stream. Anyone can critique our selections.
* We equip our partners and users with good curation tools so our voice isn’t the only voice.
* We have a vocal user base. They will let us know if we’re somehow drifting off course.
* Twitter has a lot of experience in resisting commercial pressures and protecting the product.
* The curation team is working on a set of principles. They’re not done yet.

Pieces of a solid answer. “Anyone” cannot access the firehose or use the tools that company curators will use to tame the stream, so “checking up” in that sense is not really possible. But Twitter has a point. The materials from which it is sifting are themselves public: zillions of tweets. It will be easy to argue with their choices.

As I sifted through Twitter’s answers I came to one they should have given:

* Fighting attempted shutdowns by hostile states in situations where Twitter is most needed takes a First Amendent heart. Is that what you meant?

Yes! That is what I meant. When Twitter starts curating, where does the juice factor come from? Are there any animating ideas? Should we expect Twitter to debut with editorial passions that will find strong expression in its curation product? Human rights, for example. Foundation topic for editorial Twitter, or ‘cover when newsworthy, curate when called for?’ View from somewhere, to start off? Or a more generic product, with borrowed verticals — news, sports, business, entertainment — signaling “the approach of having no distinct approach.”

To me these are fair questions. They are of interest to people who use Twitter in their daily routines (as I do.) It’s fair too for Twitter not to have very good answers yet, as they have yet to launch Project Lightning. But we know a little. Buzzfeed’s glimpse came in June 2015:

On Twitter’s mobile app, there will be a new button in the center of the home row. Press it and you’ll be taken to a screen that will show various events taking place that people are tweeting about. These could be based on prescheduled events like Coachella, the Grammys, or the NBA Finals. But they might also focus on breaking news and ongoing events, like the Nepalese earthquake or Ferguson, Missouri. Essentially, if it’s an event that a lot of people are tweeting about, Twitter could create an experience around it.

…What kind of experience? “A team of editors, working under Katie Jacobs Stanton, who runs Twitter’s global media operations, will select what it thinks are the best and most relevant tweets and package them into a collection.”

I turned my interest dial up to 11 at that point. ‘Journalism’ had been struck.

No one knows if these new screens or tabs will grow to become the main way people access Twitter. (More about them here.) No one knows if they will have any significant effect. The problem they were intended to solve is that Twitter can be a confusing mess with lots of noise, especially for new users. By creating a curated, best-of version of itself Twitter Inc. wants to make it easier for people to find value in Twitter the service, especially around big events. This is from The Verge’s very good Q and A with Kevin Weil, Twitter’s head of product.

One of the things we’ve talked about with Project Lightning is the idea of a temporary or an event-based follow. The idea is that as the VMAs conversation is playing out, in Project Lightning, you’re getting the best of this particular conversation. You’re seeing it curated live, so you can go and flip through it in a very immersive view of this conversation. You can also follow it, and when you follow the best tweets from that conversation or that event or that location or the game or whatever, it will be added to your home timeline as they happen… It’s instant, it’s immersive, and you can immediately understand what’s going on in your world as it plays out on Twitter. It will give you an entirely new appreciation for the richness and the depth of content on Twitter, but there’s also a beautiful connection between the home timeline and Project Lightning via this idea of a temporary follow.

Makes sense to me. But notice these terms: “the best of…” “the best tweets from that conversation.” We understand what he’s saying but there’s any number of ways to judge “best.” Which is yours, Twitter? “Pick the best” doesn’t say anything: on purpose. (A group of my graduate students were there and they all reacted harshly to this part.)

But Twitter is saying a lot by launching Project Lightning.

It will offer us media-rich best-of feeds that are hand picked by its own hand picked editors— assisted by machines. It will recommend them to users and make them easy to find. Here, I think, Twitter steps into another line of work. It is becoming in one part of itself an editorial company, a maker of news products. It is also starting to compete with power users and news companies that make similar “curation” products. This is from a job description for one of the editors:

We’re looking for a skilled editorial mind to lead a small team that will identify the best Tweets, photos, Vines and videos around the biggest real-world events and high profile opportunities. The ideal candidate has experience managing editorial teams in a digital newsroom and is familiar with using Twitter content to craft stories. Candidates should have experience leading editorial in one or more mainstream content verticals such as news, sports, entertainment, etc.

See? An editorial company now in one part of itself.

If Twitter’s streams catch on big then maybe getting yourself into one starts to become the point of posting a lot on Twitter. Which in turn means figuring out what Twitter’s editors want. But we already have that situation with Facebook. Which is why I asked the News and Government team: on what points of continued differentiation will Twitter be counting? (Go to 9:18 on this clip.)

Of the answers Twitter gave to the soul question the one I like the most is: People at Twitter love news. They’re obsessed. I believe it. And I think it will influence the curation product. This is from the New Yorker’s 2013 profile of Jack Dorsey, Twitter co-founder and current CEO. As a kid he fell hard for police radio and ambulance movements, which he saw as status updates.

He was thrilled by the police scanner, and still remembers its staccato transmissions. “They were reporting constantly, and they’re reporting three things usually. No. 1, where they are. No. 2, where they’re going. And, No. 3, what they’re doing. So, for an ambulance in St. Louis: ‘I’m at Fifth and Broadway, I’m going to St. John’s Mercy, patient in cardiac arrest.’ ” 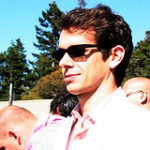 Dorsey wanted to chart these movements. In 1984, when he was eight, his father bought him an I.B.M. PC Jr.; three years later, he was given a Macintosh. St. Louis was a technologically advanced city then, home to McDonnell Douglas and Southwestern Bell. Phrack, an online magazine for hackers, was based there. Washington University let locals use its computer network, and Dorsey tapped in so that he could gain access to the Internet.”

With Twitter Dorsey got to chart the movements of the ambulances— and a lot more. Twitter was born of a love for news systems. I know it’s pretentious and everything and I do apologize for that, but editorial Twitter needs its own (incorruptible) soul, related to the love of news for sure but equally about independence, truthelling and giving the mic to people: picking who has voice.

A lot rides on Project Lightning. Let’s see it before we assess. (UPDATE: it launched.) And the curation principles: let’s seem them when they’re ready. If I were a VC, a shareholder or an employee with a big stake in Twitter getting this right, I would be slightly concerned if the choice is simply to import consensus practice and “apply” it to make Lightning happen. “We have a professional newsroom now” you can proudly say, skipping over the part where you say what a technology company uses one of those for.

Sounds like bad news for a service that has the potential to be almost entirely democratic in an often non-democratic world.

Is there a way to be emailed when you post one of your stories? Or do you have an e-newsletter? I don’t see a subscribe page but thought I’d ask.