Hating on journalists the way Trump and his core supporters do is not an act of press criticism. It’s a way of doing politics.

My talk at the International Journalism Festival in Perugia, Italy, April 4.

“Hate movements” are the mobilization of resentment against a particular group of people for political purposes. When journalists are the group targeted, those of us who believe in a free press have a right to be worried, and a duty to understand.

I am going to focus on the hate movement against journalists that President Trump is leading in the U.S. But I am not saying this kind of movement originated in America. I am not claiming that it is anything “new.” Or that Trump’s methods are some kind of innovation. I’m not saying we in America have the worst case of it; we do not. I am simply describing the situation in my country because I know it best. Our purpose today is to compare.

So here are some of the features that stand out about the hate movement against journalists that our president is conducting in the United States. Tell me if any of these sound familiar:

Trump’s campaign to discredit the press comes disguised as the criticism of bias in the news media. Defenders of Trump’s attacks on journalists routinely tell me: “you brought this on yourselves.” They mean by being so biased. But what they mean by bias is not cases of unfairness or blindness that can be highlighted and corrected. They see a complete evacuation of public responsibility by journalists. From their point of view, American journalism is not reformable. It is corrupt and dangerous.

Within the frame of this movement, no distinction is made between professional journalists and political opponents. Rather, journalists are political opponents, and that is the only thing you need to know about them. It is routine within the conservative movement in the US to describe journalists as “Democratic party operatives with bylines,” or “progressive activists with press credentials.” This was common before Trump. He has weaponized it.

Hate objects need names. Before Trump, the object’s name was “the media” (or mainsteam media.) Trump has been slowly changing it to “the fake news,” but The Media is still common. That term, The Media, doesn’t refer to specific institutions like the Washington Post or the AP. It’s like saying “the banks,” or “the deep state.” The Media has no address. It is a mental construct, not an institution.

Hating on journalists the way Trump and his core supporters do is not an act of press criticism. It’s a way of doing politics, often called populism. In populism, you aggregate and mobilize for political gain people’s resentment of elites, who are described as corrupt and dangerous because they operate behind the scenes using unearned power. The leader promises to deal harshly with this despised group, and deliver justice to “the people.”

When Trump points to the reporters and camera men at his rallies, he is presenting the hate object to his fans. 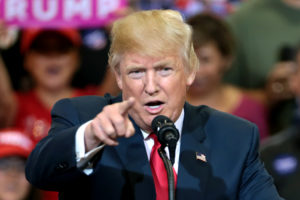 It doesn’t matter who the journalists are, where they work, or what their recent performance has been. Again, this is not an act of criticism. It is a potent form of symbolic politics. Like putting 20 bankers in a cage, dropping the cage into the middle of a political rally, and then pointing at the people inside. “There they are. The banks!”

The Republican Party has been practicing this form of politics since at least the time of Barry Goldwater’s run for president in 1964. It is not new. What’s different now is that mobilizing resentment is increasingly what holds the party together. And there’s another factor. The Republican Party increasingly takes positions that guarantee conflict with fact-checking journalists doing their job. The clearest example is climate change denialism. When that becomes an orthodox position within the party, conflict with the press is guaranteed— unless, of course, journalists retreat from truth telling and evidence-weighing into he said, she said reporting.

That dynamic — forcing conflict with a fact-checking press — was there before Trump. But he has weaponized it. Every day he makes false claims that are easily checked— thousands of them so far. Recently he announced on Twitter that Puerto Rico had received $91 billion in hurricane aid from the USA. The actual figure is $11 billion and Puerto Rico is the USA. The conflict with the press is therefore structural, built into the Trump presidency. If journalists do their job, and point out the truth of the situation, what his supporters will see is The Media attacking their guy again. This enrages them. The only way to prevent this reaction is to abandon the job and just pass along whatever Trump said, even if it’s disinformation.

Previous presidents struggled with the press, of course. They sometimes thought journalists as a class were “against” them. Obama thought reporters were preoccupied with trivialities. Nixon hated the press, but he mostly kept it private. Whatever their problems with it, previous presidents also saw the press as a crucial part of American democracy, like free and fair elections, the rule of law, and an independent judiciary.

Trump attacks all these institutions. He undermines trust in all of them. But his hate movement against the press has a special intensity and tempo. It is basic to the way he governs, even though, as many White House correspondents have pointed out, he cares deeply about his coverage in the press, calls journalists at all hours, and can be friendly and charming to them in person.

It is true that there is disgust and resentment at the press on the American left too. Some of this criticism can be quite totalizing and dismissive. The difference is that the Democratic Party has never incorporated that rage into the way it does politics.

“We’re not at war, we’re at work.” This sentence from Marty Baron, editor of the Washington Post, captures perfectly how journalists think about this situation. Don’t let Trump provoke you. Remain calm. Don’t play his game. What Baron’s remark does not do is address the problem I have described here. If you do your job, then you’re playing the role of hate object and participating in Trump’s political style. If you don’t want to be a hate object, sorry— then you cannot do your job. Detachment loses its meaning in this system, which incorporates journalists whether they like it or not.

Why does it matter? It matters because one third of the American electorate has been isolated in an information loop of its own. For this group, which mistrusts the mainstream press on principle, and as a matter of political identity, Trump has become the major source of information about Trump, along with Fox News, which has slowly been merging with the Trump government. An authoritarian news system is up and running, in the country that was once known for having the strongest free press protections in the world.

Trump was in his ’20’s during the Nixon administration which seems to have been the period when Trump’s enduring traits and life lessons became fixed. Nixon did not keep his animus towards the press “private” because he delegated the attack functions to his Vice President, Spiro Agnew. The 1970’s were a different time, so Agnew would bracket some of his most inflamatory remarks between blandishments about the press being a good thing as a general proposition, blah, blah, blah, which Trump doesn’t bother with or undermines.

Yet there was an irrational, disportionate anger that Agnew-as-Nixon-proxy tapped into and ignited, something deeper and darker than a simple dislike of the media. People before him had been critical of the press and made allegations of bias, but Agnew leaned into the personal aspects and clearly relished adding ad hominem acid to the assaults on the institution. His audience was excited by the venomous, intemperate quality of attacks, and found them exciting. Nixon would alternatingly deploy and restrain Agnew, in concert with his personal hate/love/hate relationship with the press. He hated the negative coverage, while a part of him inclined for their love and approval, when unrequited, leading to a greater hate. Nixon and others found gratification, not merely advantadge, in generating hostility towards the press.

A very large part of the point of the attacks is the on-demand infliction of pain but there is also the public wielding of the power to direct a rising mob. Place the targets in public peril while reffirming call-and-response control of the ignited audience.

There is no pearl-clutching about this stuff. There are these ugly, shallow subtexts — the anti-Semetic fires that fueled Agnew-as-Nixon-proxy — the prospect of violent action after the verbal call-and-response encitement — and the wider application of force, beyond the media, as when Trump coyly enlisted ‘the bikers, the police and the military’ in a “very bad, very bad” struggle against political apponents. The Trump mix has these absurd, buffoonish, almost comic elements mixed in, designed to amuse, thrill, and distract from the realization that he is playing with very dangerous forces.

Honestly, the Nixon-Agnew relationship you describe is somewhat analogical to the McConnell-Trump relationship.

The question is, Are Trump going to elect for second times? I don’t like Trump’s attitude to Journalists. Journalists are the eye of society. If they neglected by Trump. I strongly condemn this type of action.