The announcement that NBC did not make about Brian Williams getting a second chance there.

They had an opportunity to rid themselves of toxic anchorman syndrome and credibility collapse via celebrity behavior. But no...

This from Jonathan Mahler is dead on:

NBC’s handling of Mr. Williams suggests that the network is still clinging to an increasingly anachronistic vision of the anchor’s chair as a sacred throne, and the anchor as the voice of moral authority. It’s a response that seems in many ways tone-deaf to the striking changes in the way we consume information — changes that are reshaping the relationship between newscasters and consumers. The news anchor is no longer the embodiment of reason and truth; his voice is now just one of many. And network TV is just another platform.

Likewise: this from Frank Rich in April. (“Like the cockroach, the anchorman has outlasted countless changes in the ecosystem around him.”) In recognition of these facts, I took the liberty of composing a news release that did not happen this week. It’s my way of commenting on an opportunity missed by NBC. 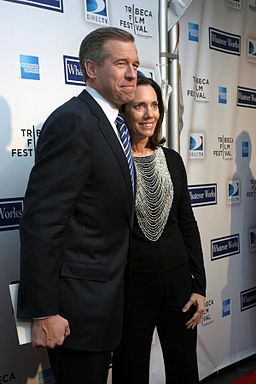 The announcement that Brian Williams would return to the newsroom — but Lester Holt would take over his old job — was a gift to NBC executives because it allowed them to retire an overgrown and ill-fitting job description (lead anchor as face of the brand, “anchor’s chair as a sacred throne…”) that is not only outmoded and hard to believe but actively harmful to the news division— and to the person who is is installed in that creaking chair.

They had a chance to rid themselves of toxic anchorman syndrome and credibility collapse via celebrity behavior. But they couldn’t grasp it. They refused the gift.

Here, then, is the press release they never wrote, but should have.

Imaginary press release starts here: don’t quote it out of context. I made this up!

NBC News announced today the eventual return of its suspended broadcaster, Brian Williams, to active duty and his replacement as anchor of NBC Nightly News by Lester Holt, NBC veteran and Weekend Anchor, who had been filling in for Williams during an investigation of misstatements he made about his reporting work for NBC.

“Lester stepped into the anchor chair in a trying time and has really come through for us,” said NBCUniversal CEO Steve Burke. ‘We are lucky to have him and I know he will continue to do great things at NBC News for years to come.”

Brian Williams, the network announced, will re-join MSNBC as anchor of breaking news and special reports. He will occasionally anchor “live special reports” on NBC when Holt is unable to or better used elsewhere. “Brian now has the chance to earn back everyone’s trust,” said NBC News Chairman Andrew Lack. “His excellent work over twenty-two years at NBC News has earned him that opportunity.”

Previous anchors had been named managing editor of the NBC Nightly News and were considered responsible for the final program. In a note to staff, Lack announced that this tradition would end, and the anchor’s job would be right-sized for a different era in journalistic authority. “Brian himself has said that ego got in his way, with disastrous results,” Lack said. “We do not think that was just a personal failing.”

After its internal review of Williams past misstatements, NBC and Comcast executives engaged in a wide-ranging discussion of possible remedies. Leadership came to the conclusion that a management decision by its top executives, not one or two but a succession of them, had allowed the lead anchor position to evolve into a principality of its own, ruled by one voice: the anchor’s.

The review also found that NBC and Comcast had encouraged Williams to play up his celebrity status and devote more of his after-work hours to appearing on entertainment television. This was part of a plan to appeal to younger viewers by making the face of the NBC News brand a friendly and familiar one with obvious standing in cultural venues outside of news.

“Face of the brand, ambassador for the news division in other media spaces, managing editor of the flagship broadcast, hard working anchor for NBC Nightly News, symbolic leader of the news troops at NBC, globe-trotting reporter when a big story hits, charming and funny celebrity for the talk show set, trusted on-air guide when a crisis requires the network to go live— that is far too much for any person, any position,” said Andrew Lack in his note to staff. “We allowed it to get out of hand.”

NBC said that the lead anchor position would still exist, that its salary would stay the same or rise, and that Lester Holt, a popular figure inside and outside NBC, would not only anchor the NBC Nightly News but also preside over the network’s live coverage, such as elections, a president’s speech to the nation, or a major news event like Hurricane Katrina.

“Lester Holt is our lead anchor,” said Comcast CEO Steve Burke. “We want him to focus on the news and maintaining the trust of our viewers, not his own celebrity in a cultural space outside the news.”

Andrew Lack, in his note to NBC staff, said: “When we go live, Lester Holt will preside over the broadcast, introducing and connecting the work of NBC journalists while explaining to viewers what is going on. Anchoring ‘Nightly’ and sliding into the hot seat for live coverage: these will be the core duties of NBC’s lead anchor going forward. We are reducing a bloated job description to two key elements, and re-setting everyone’s expectations.”

Lack made it clear that the executive producer of NBC Nightly News — not the anchor — would have the final word on all editorial decisions. “We are going to eliminate any ambiguity about that.”

NBC also announced that the “roving anchor” model, in which the entire broadcast shifts to a breaking news location so the anchor can be visible on scene, would be retired and the dollar savings used to put more reporting resources on the ground at major news events. “The anchorman as ‘voice of god,’ if it ever did exist, does not describe the media world of today,” Lack said. “By right-sizing the position we plan to give Lester Holt everything he needs to succeed for many years to come.”

— Imaginary press release ends here: don’t quote it out of context. I made it all up! —

Earlier from me on the Brian Williams mess:

Here is Brian Williams interviewed by NBC’s Matt Lauer about his return to the network.

It is interesting that you quote Jonathan Mahler approvingly, since later in his analysis comes a claim that is in utter contradiction to the sentiment you wishfully advise NBC News to advance.

Here is Mahler’s conclusion: “…what NBC failed to grasp is that today the ‘moral authority’ of the anchor has no more practical value, and quite possibly less, than his or her ‘relatability.’ Mr Williams understood this, which is partly why he spent so much time working on his persona outside the anchor’s chair…”

Mahler’s argument contains a hint of a straw man. He says that the news anchor “is no longer the embodiment of reason and truth” but I am not sure he ever was such an embodiment. Certainly the complaints against Williams were not about his failure to be the “embodiment” of reason and truth. They were more basic: simply that he had failed to behave reasonably and truthfully.

Similarly Mahler’s invocation of “moral authority” is also a straw man. Even in the bloated job description laid out in this post — “face of the brand…ambassador for the news division…managing editor…hard working anchor…symbolic leader…globe-trotting reporter…charming celebrity” — there was no mention of morality, let alone moral authority.

These quibbles aside, the underlying point here is well taken. A news organization should base its appeal to its audience on the quality of its journalism rather than by luring viewers with qualities that are extraneous to the job of newsgathering, such as celebrity.

The “relatability” question is the interesting one, since it is probably a core competency of a broadcast journalist rather than an extraneous one. Where I have a quibble with Mahler is that he endorses the proposition that the anchor’s chair is an inappropriate place to showcase one’s relatability. On the contrary, it is where it is showcased most authentically.

I read those phrases — “embodiment of reason and truth” and “moral authority — as references to the Cronkite era, well… mostly to its mythology. As in: “Most trusted man in America.” (Truth, Authority) When you’ve lost Cronkite, you’ve lost the country. (Reason.)

“”Similarly Mahler’s invocation of “moral authority” is also a straw man. Even in the bloated job description laid out in this post — “face of the brand…ambassador for the news division…managing editor…hard working anchor…symbolic leader…globe-trotting reporter…charming celebrity” — there was no mention of morality, let alone moral authority.””

Presumably the moral authority is presumed and not necessary to mention. Quite clearly, the audience is expected to approve of what the anchor seems to approve, and to disapprove that which he finds morally unpleasant. The lifted eyebrow, the inflection, all are supposed to have an effect and that is in addition to that which the anchor tells us.

He probably is still on contract and not everybody knows/cares about the issue. So it is better that he has to work to earn his pay check.